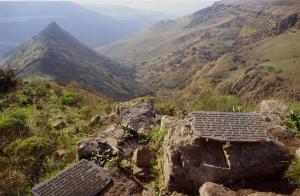 Situated in a remote spot overlooking two small streams and the Sea of Galilee in the distance, Gamla combines two unrelated areas of interest for explorers.

On the far side of a canyon nest a very small population of vultures and eagles. A very short walk from the bird-watching you can overlook the ancient town of Gamla, arrayed on the hump-like hill located in the canyon ahead of you. There Jewish defenders held out against Roman Legionnaires in the year 67 as the Romans began to quell the Great Jewish Revolt which culminated in the destruction of the Second Temple in Jerusalem.

The park enables hikers to experience both archeology and antiquities. A 15 minute hike takes you down to the ancient synagogue of Gamla. A longer hike in the opposite direction takes you to a high waterfall. On the way you’ll see dolmens, huge stone burial monuments dating back 4,000 years.