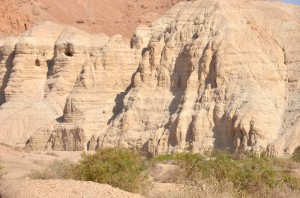 We experience the sudden transition from green Jerusalem to the Judean Desert, the smallest desert in the world. Due to its quiet and proximity to the Holy City, it became, during Byzantine times a popular place for monks to live out one of the ideals of Christian life. Today in some of those places the largest Jewish town in Judea, Maaleh Adumim, continues to expand, a bedroom community of Jerusalem, whose industrial area was home to a Soda Stream factory where both Palestinian Arabs and Jewish Israelis were employed side by side.

As we descend further the trees become more sparse. Camels, goats and sheep can be spotted by the observant on the ridge lines above the highway and small Bedouin shanty towns appear as well. When we gaze upon the still-life scenes at the Bedouin encampments we should reflect that this is as close as we can come to understanding the life-style of our Biblical patriarchs and matriarchs who lived here close to 4,000 years ago.

A little further on we pass the sign informing us that we are now at  Sea Level. Here a lone Beduin waits with his decked-out camel for people like us to pull over for a great photo-op.

As we come around a turn the entire Jordan Valley opens up to us and we see the flat city of Jericho sprawled out on the desert floor a couple of miles to our north on the left. To our right the Dead Sea extends beyond the horizon. Just past the turnoff to Jericho we contemplate a quick stop at the next junction which provides gas for travelers, food, some shopping, and another camel ride opportunity.

A few minutes later we have turned south, and perhaps if we are observant we will have seen a herd of some 40 young camels grazing in the desert under the watchful eyes of their young Bedouin shepherd. We now parallel the Dead Sea on our way south toward Masada.

Our first stop will be Qumran, site of the discovery of the Dead Sea Scrolls in 1947 by three Bedouin. The Scrolls are said by scholars to be the most important discovery for the understanding of both Christianity and Judaism. The Scrolls contain the oldest surviving copies of the Bible by more than a thousand years, and the text is almost exactly the same as the text that we use today. Most interesting, if one can read modern Hebrew one can read the Dead Sea Scrolls, written 2,100 years ago!

We continue our journey southwards and in another 30 minutes Masada begins to appear, a mountain set slightly apart from its surroundings and slightly to the east of the cliffs of the Judean Desert. The story of Masada inspired generations of Israelis and despite todays more critical approach to this part of Jewish history the mountain and its stories hold an irresistible attraction.

As we approach the desert fortress it’s features become clearer and we notice the step-like structures on the northern side of the mountain, Herod the Great’s Northern Palace. We also note a serpentine white trail which makes its way up from the desert floor to the gates of Masada, the so-called Snake Path. We will spend between an hour to three hours here at Masada, including the tour upon the summit, the cable car, short movie, extensive gift shop and possibly, lunch.

Still thinking about our last stop we begin the return journey to Jerusalem. Just 15 minutes later we enter the National Park at Ein Gedi. King David escaped King Saul’s wrath here and ultimately an event which took place lead to their reconciliation. Ein Gedi’s fame in the ancient world however stemmed from its secret formula for a perfume with aphrodisiac-like qualities. We’ll use the waters here to refresh ourselves.

We change into bathing suits and prepare for a 20 minute hike up Nahal David, or David’s Canyon. The best water in Israel flows down the canyon, originating in a spring found high above us. Our goal is the high water-fall which marks the end of our trail. On the way down, sweating now, we find a waist-deep pool and gingerly enter the very cold water. Everyone who enters the waters of Ein Gedi comes away refreshed and pleased. We return to the bottom of the trail, always keeping an eye our for the little Hyrax and nimble-footed Ibex that make their homes in this nature reserve.

Refreshed and seeking new experiences we continue north to visit a beach on the Dead Sea itself. Dead Sea water is so dense that everything, including people, float in it. Enter carefully, as anyone with cuts on their bodies will instantly be reminded of their condition when the salt water touches them. Now lie back…and float, without a care in the world. The mountains of Moab across the Sea from us, begin to turn its famous reddish hue as the sun begins to move lower in the sky. We begin to think of dinner and so, reluctantly, depart the lowest place on Earth.

We begin the climb back towards Jerusalem in earnest and just a few minutes before entering the city, we turn off the main road and find ourselves in a desert encampment called Genesis Land (Eretz Beresheet). Here we’ll have a short camel ride and enter an open tent where an appropriately garbed character will recall for us the story of the Patriarchs from Genesis in the first parts of the Bible. Here the food keeps on coming and no one needs a midnight snack after this desert feast. We finally make our way back to Jerusalem as the sun sets. We will not forget this day.

In this menu, listed according to region, you’ll find sample itineraries and sites which will be of interest to Jews of all denominations.

A decision to celebrate your child’s Bar or Bat Mitzvah in Israel recognizes Israel as central to the Jewish people and is a major family commitment towards the future of the Jewish people. We want to make sure no detail is overlooked. We will tailor your trip individually to make it one of your family’s most enriching and memorable experiences. We put you in touch with the right Rabbi who will get to know your family and conduct a meaningful service appropriate for your family’s religious beliefs. If you require an experienced photographer or the right caterer we’ll help you find them as well.

Take a look at our regional tours to decide where you’d like to spend your time in Israel.