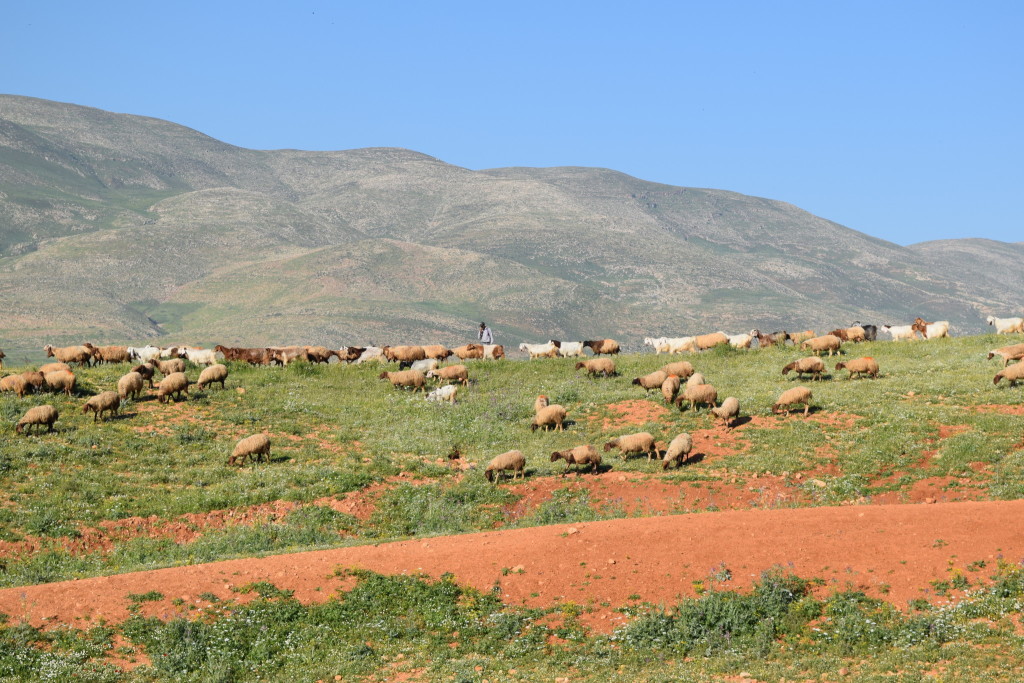 A local sheperd grazes his flock amongst the winter grasses in eastern Samaria.

There are a remarkable number of important and interesting historical, religious and entertainment sites within easy distance of Jerusalem. Bear in mind that Jerusalem is surrounded to the north, east and south by the West Bank (historic Judea and Samaria). This area is the biblical heartland of the Jewish people and among the most beautiful and unspoiled in the Land of Israel. It is home to Jews and Palestinians and conflict here can lead to security concerns which should not dissuade the interested traveler from discovering worthwhile sites. Below, we have divided the area surrounding Jerusalem according to the points of the compass: south, west, north and east. We can spend day trips in each of these regions as the abundant listings below will make clear.

Herodium One of King Herod’s seven desert palaces, this one is the closest to Jerusalem and thus the easiest to view. It’s also the most important. Herod named this place after himself and he chose to be buried here. Finding the burial site of Herod was the life’s work of the renowned Israeli archeolgist Ehud Netzer who himself died of injuries sustained from a fall here at Herodian which occurred while he was guiding the site. Prepare to be impressed when you arrive here. First class Roman accommodations and secret, underground escape tunnels are a part of the dramatic landscape on the edge of the Judean Desert with Jerusalem and Bethlehem easily visible in the distance. 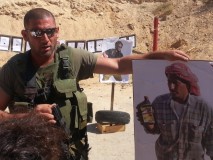 When you pull up to Caliber 3 you get the idea that this is no theme park. Come here on any day of the week and you’ll see Israeli security personnel being trained by the same no-nonsense, bulked-up, ex-IDF soldiers that will train you. You’ll get to shoot pistols and assault rifles at targets. But more than that you’ll begin to see the IDF ethos in action as your instructors share with you the split-second decision making that must be made to ensure that innocent civilians aren’t harmed when terrorists mix among them.

Hebron, Cave of the Patriarchs (Machpelah) 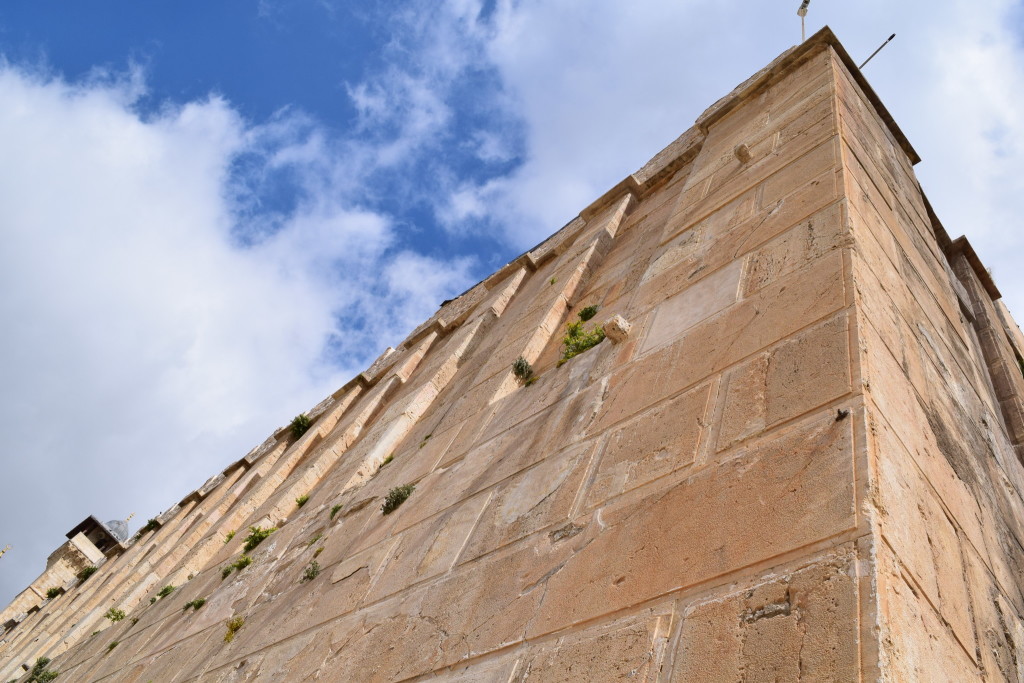 A close look at the ashlar stones over the Cave of the Machpelah in Hebron reveals their similarity to the stones used at the Western Wall in Jerusalem. Both structures were built by Herod the Great.

For the true pilgrim wishing to understand the Judeo-Christian connection to the Land of Israel, Hebron is a must see. Although only 45 minutes south of Jerusalem few foreign tourists come here but that should not dissuade you. Hebron earns mention in Genesis, when Abraham, father of the Jewish nation buys a plot of land for a handsome price to be used as his family burial plot. Today Jews and Moslems venerate the spot, appropriately located within a grand building built by the greatest builder of the ancient Roman world, Herod the Great.  Close to 1000 years later King David first ruled here, before moving his capital to Jerusalem. Hebron and Jerusalem represent the epicenter of the Moslem-Jewish conflict in the Holy Land. 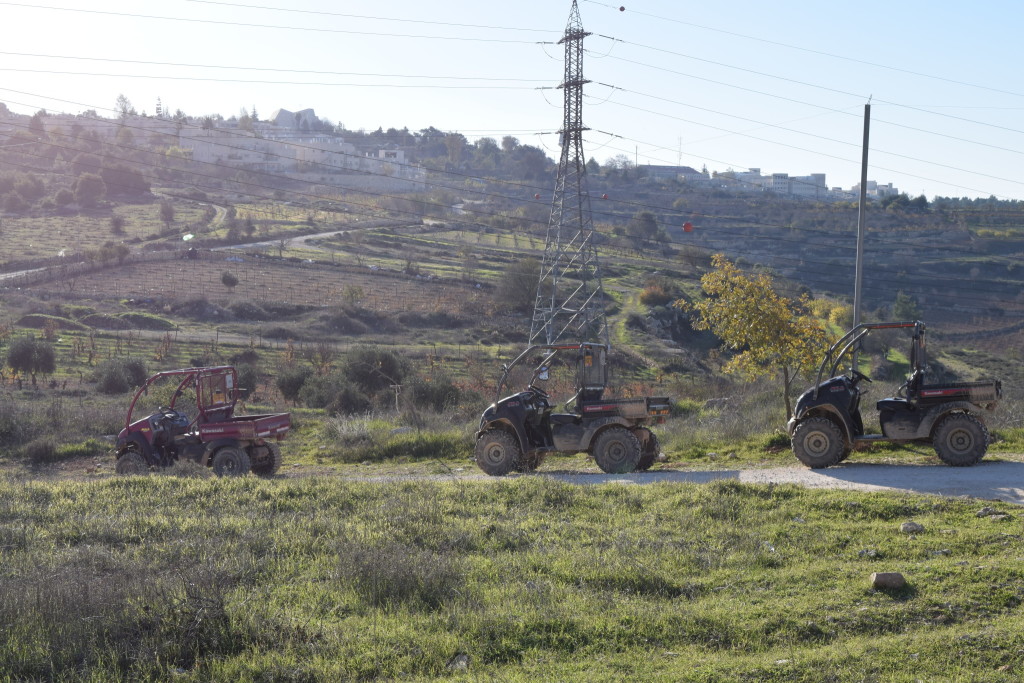 Riders enjoy the scenery easily accessible only via vehicles and guides provided by ATV Gush Etzion.

This was one of a string of fortresses which protected the approaches to Jerusalem from the west. The haunting lines: “We can no longer see the signal fires of Azeka.” were written about this place in the 6th century BC as Babylonian armies overwhelmed Israelite defenses. Each summer archeologists and their teams dig into the earth here at Tel Azekah which was an Israelite settlement. Situated above the Ella Valley, the site contains, among other finds, 8th century BC (Iron Age II) and 13th century BC (Late Bronze II) settlements from pre-Israelite and Israelite periods.

The name of this archeological site means “two gates” and it’s the only site in the area which has two (recently discovered) gates around it. As a result many archeologists surmise this is biblical Sha’arayim which is mentioned in the account of the battle between David and Goliath. Upon Goliath’s defeat the Philistines fled the battle ground, and were killed “on the road to Sha’arayim” (I Samuel 17:52). Sha’arayim was one of a series of Israelite fortresses, including Tel Socoh, Lachish and Tel Azekah which protected Jerusalem from the west.

Castel National Park As one approaches Jerusalem from the west, one crests a hill and sees the holy city for the first time. At that point above us to our right on the highest hill is the Castel, where Jewish and Arab armies fought fiercely to control the high ground and thus control of the road leading to Jerusalem during Israel’s War of Independence in 1948. Stop here as part of a Zionist tour to appreciate what Yitzchak Rabin, former Israeli Prime Minister, said– the battles for Jerusalem were the toughest the IDF ever fought.

Just outside of Jerusalem, to the west, in the middle of the John F. Kennedy Peace Forest, stands a memorial to President Kennedy meant to look like a tree cut down too early. This is a good place to bring a family for a picnic or to set off from here on hikes on the many nature trails in the area. Views of Jerusalem and even the Mediterranean Sea are excellent from here, a place of quiet contemplation when school groups aren’t passing through.

Less than a 20 minute drive from the entrance to Jerusalem you can find yourself at Sataf in the Judean forest overlooking the Sorek Stream bed, discovering ancient agricultural terraces which were first created 45 centuries ago and which were still utilized by local farmers into the 20th century. Explore water sources in hewn caves and swim in man-made pools here. Today some of the fields are farmed by city dwellers in Jerusalem who travel here to connect to ancient agricultural techniques. Close at hand across the valley you’ll spot the St. John in the Desert Monastery. 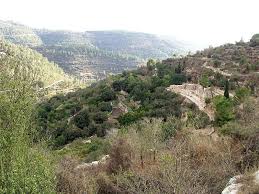 50 minutes from both modern  Tel Aviv and Jerusalem in the beautiful, low, rolling hill country west of Jerusalem, a series of fortresses protected Jerusalem from the west. Just before the Babylonian conquest of Jerusalem in 586 BC the stronghold of Lachish was the last holdout protecting Jerusalem. In a haunting message relayed to a military commander his subordinate reports that they can no longer see the signal fires from Lachis’ neighboring fortress at Azekah. The message is confirmed by the prophet Jeremiah’s historical account of the fall of the forts to Jerusalem’s west. 20th century archeologists identified the siege ramp and walls protecting the city from the time of the towns’ conquest. 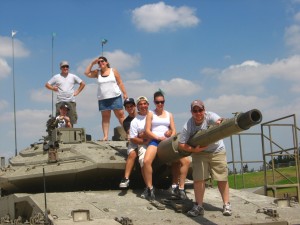 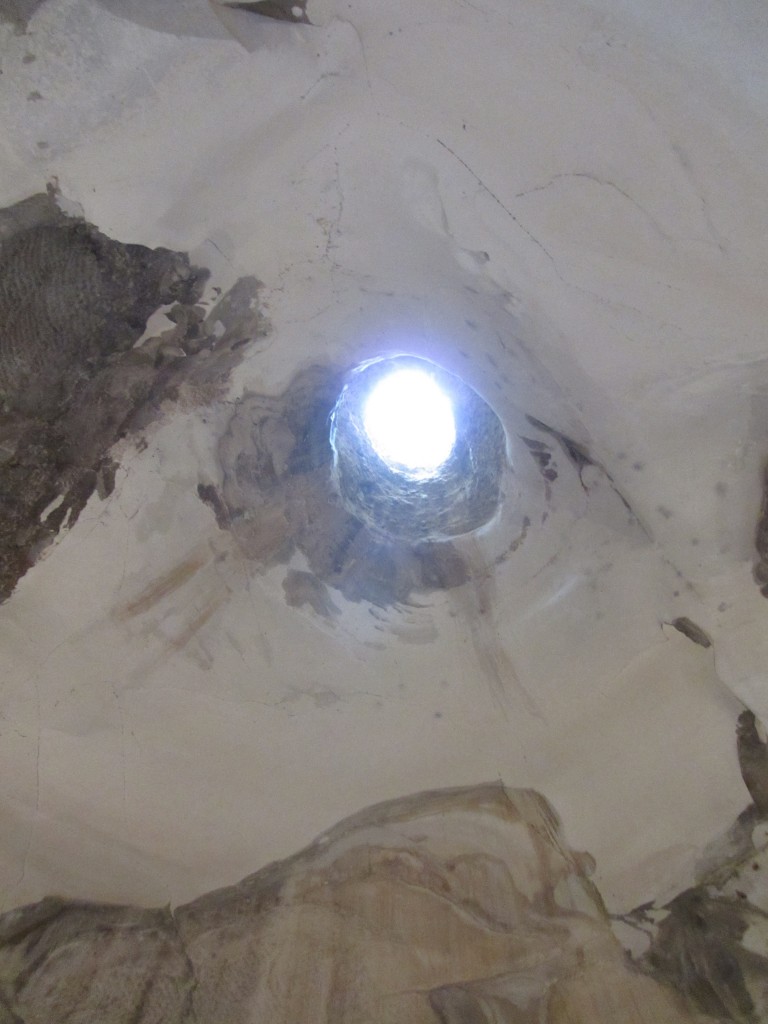 Huge chambers remain millennia after miners chiseled building material from beneath the surface in Bet Guvrin.Kiftzuba (for kids) 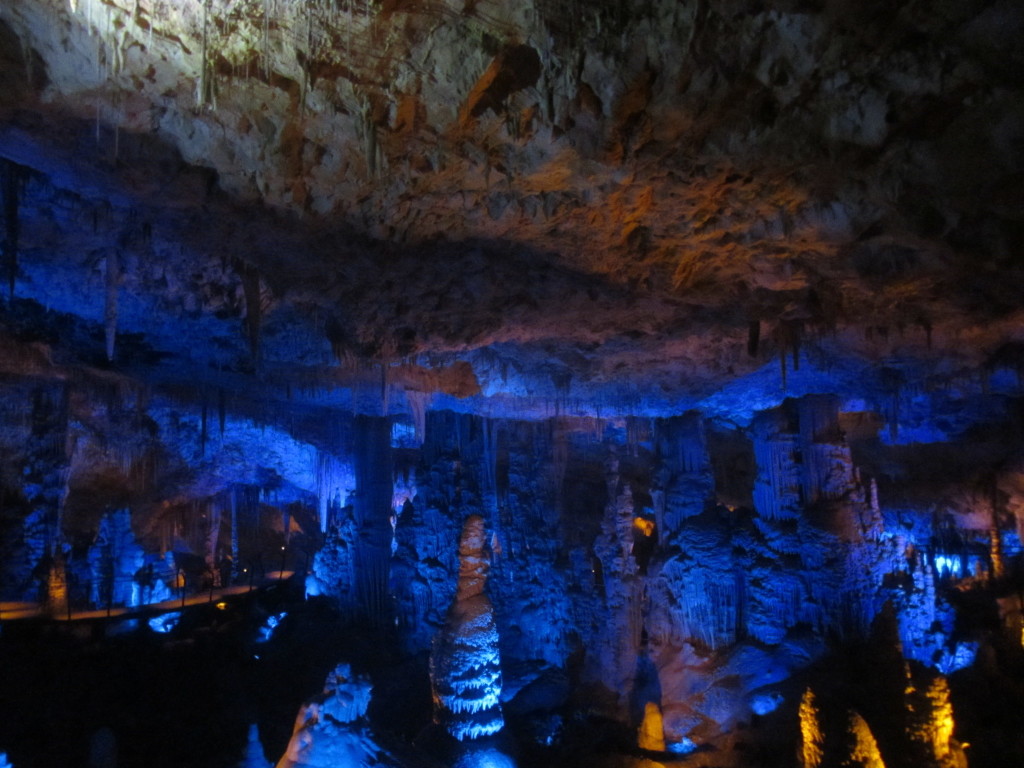 North of Jerusalem, in Judea and Samaria (West Bank) 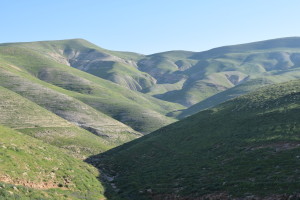 The hills of Samaria after the winter rains are an empty, tranquil biblical landscape come to life.

For the serious student of the bible, Shiloh is a must see. Home to the Ark of the Covenant for several centuries until David brought it to Jerusalem, Shiloh is located in biblical Samria, amongst some of the most beautiful countryside in the Land of Israel. 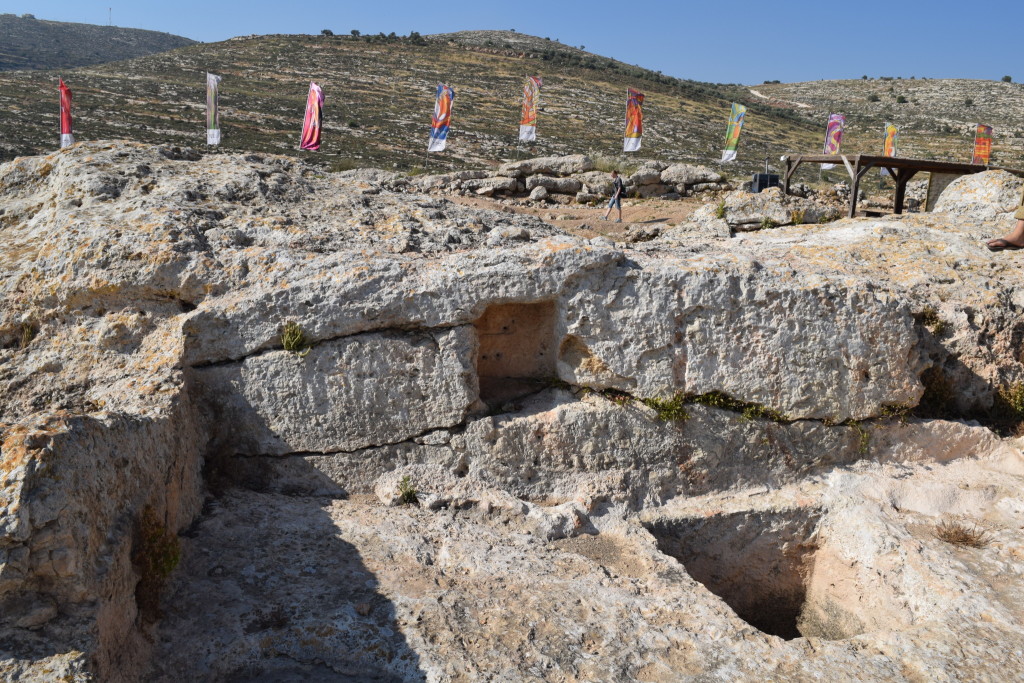 A unusual combination of stone carvings at Shilo hint at it’s unique status as an Israelite cultic site. 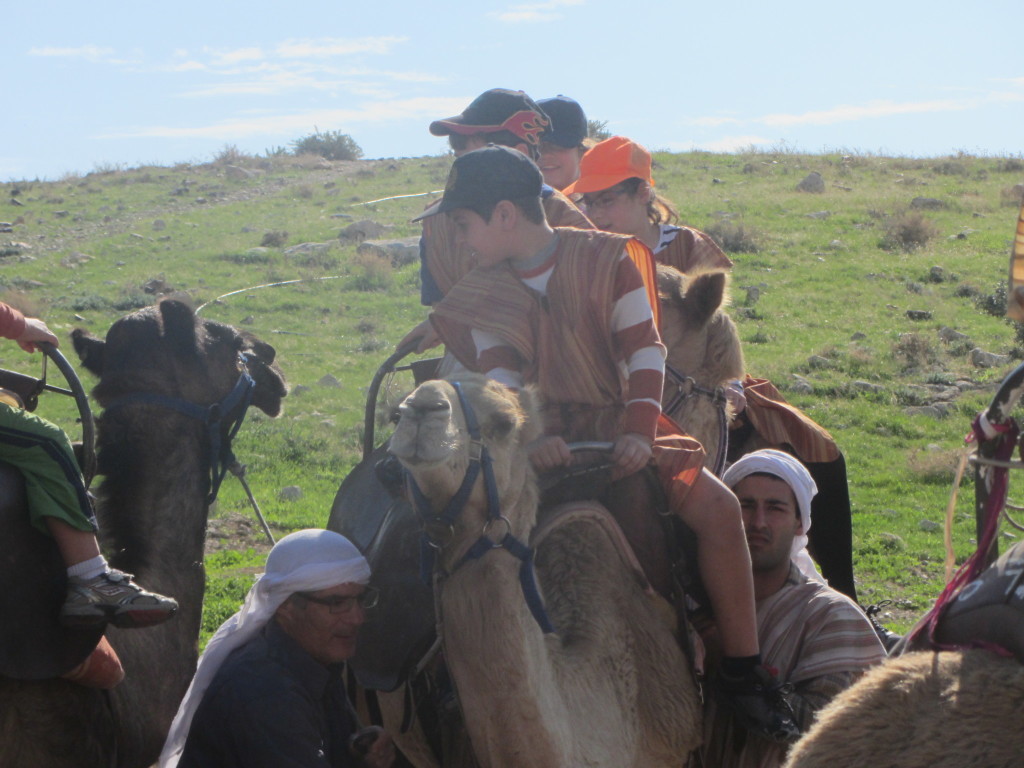