Rosh HaNikrah: Grotto’s at the End of the Line. 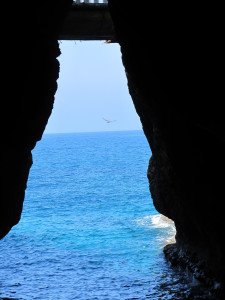 Over millions of years, wave-battered rock has yielded to create grotto’s on Israel’s northern-most coast.

Rosh HaNikra is, in a sense, typical of many Israeli tourist destinations: a combination of ancient and modern history set in a placid setting with a hint of menace. In biblical times it was known as over land entry way to the Land of Israel and was known as the Ladder of Tyre, so named for the first large town just across the border in Lebanon. In modern times the British build a series of tunnels for a railroad that passed by here in order to move supplies and men between the Middle East and Europe. But beyond history, Rosh Hanikrah draws visitors for its sheer beauty. The Sea, with its present wildlife, including Sea Turtles which can be seen by the discerning eye from above, is always a present force. The caves, or grottos, the product of erosion over millions of years add an air of mystery to the site. We ride the steep cable car down from the road to the grotto’s entrance and enters the railroad tunnel where one walks upon the old rail road tracks. After an introductory film about the origins of the caves and the history of the place, we enter the grottos and eventually find ourselves on the massive white chalk rocks that can be seen from as far away as Haifa on a clear day.  After we return to the road we take a left turn, walk a few meters and find ourselves at the border fence between Israel and Lebanon. As the sign says, we are closer to Beirut than to Jerusalem. Rosh Hanikrah represents the Israeli spirit, an insistence on celebrating beauty and nature, even amidst the environment of a hostile border.