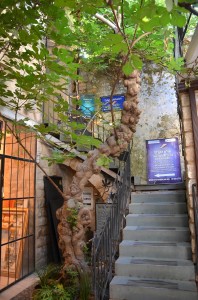 The Fig Tree Courtyard, so named for the Fig tree which has been nursed back to health by local developers now is home to several art galleries. Formerly it was a family residence and it still contains a water cistern, visible in the courtyard.

Don’t miss Safed! Whether it’s the mountain air, the insights into Jewish mysticism, the unique synagogue architecture or the unparalleled art and Judaica, everyone enjoys walking the stone covered alleys of this Upper Galilee town.

We’ll descend past Messhiah’s Alley, find our favorite eatery in the square, and then descent towards the Ashkenazi Ari synagouge. After stopping there to gain insight into Kabbala (Jewish mysticism) we continue towards the art colony and visit the Abuhav Synagogue as well. Here in the middle of the 16th century a Jewish community flourished and set an example due to its caring nature and it’s scholarship in practical halakha (Jewish Law) as well as the 1900 year old Kaballa.

The Fig Tree Courtyard, see photo above, is named for the Fig tree which has been nursed back to health by local developers. The courtyard is now home to several art galleries. Formerly the site was a family residence and it still contains a water cistern, visible in the courtyard.

Other sites in Safed include:

The Citadel, located on Safed’s hightest Hill, it was a part of the largest Crusader Fortress in the Middle East. Today it is a welcome rest stop with unparalleled views.

The Davidka and Police Station, tributes to the battle waged here between Arab and Jewish forces during Isreal’s War of Independence when the small Jewish community, outnumbered eleven to one by the Arab population, refused to leave and was saved, according to local lore by the practical prayers and miraculous intercession of the Jewish defense forces.

The Safed Cemetary including the Tomb of the Ari. 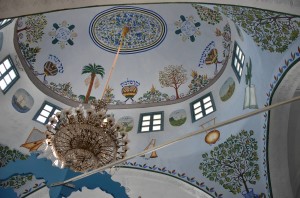 The ceiling in the Abuhav Synagogue features religious themes arrayed above the bima.