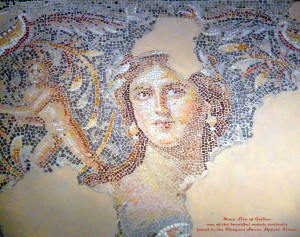 The so-called :Mona Lisa of the Galilee” can be seen in the remains of a mansion situated on the highest hill in ancient Tzipori.

Jewish sources claim that Tzipori, which means bird in Hebrew, gets its name because the town soars from its position like a bird on the top of a hill. Roman aquaducts, beautiful mosaics from a wealth of cultures, a synagogue with both Jewish and pagan themes in its floor mosaic, an amphitheatre and Roman Cardo combine to make this Lower Galilee a source of fascination for lovers of anitquity. Tzipori revolted against King Herod in the first century BC and paid a terrible price. But Tzipori, a mixed Jewish and Pagan city wisely chose to sit out the Great Jewish Revolt against the mighty Romans in the first century. By the end of the second century it had become a preeminent site of Jewish scholarship; the most powerful Jew of the time, Rabbi Yehuda HaNasi chose to make this his home as he edited the Oral Law (Mishna) first handed down in part at Mt. Sinai to Moses, 1450 years before. A Christian tradition places the birth of Mary, mother of Jesus, here. The site is only six kilometers from the hometown of Jesus, Nazareth, and scholars hypothesize that Joseph would take a young Jesus with him to work on building projects in the bustling town, over the ridge from tiny Nazareth.