Tips are not expected in taxis here. Restaurant personnel do expect them and tips have increased over past several years here from 10% to 15%.

Bring your ATM card and you wont need to bring a lot of cash with you. Most shops, tourist sites and restaurants accept plastic.

Israel’s socialist roots have at least one benefit. Dress codes are lax and no one will be checking you for a tie as you enter a dining room. So consider packing lightly. Also, from May through September you’re almost guaranteed not to need rain-gear. Summer-time temperatures will drop into the 60’s at night in Jerusalem but sweaters aren’t needed until September.

Sometimes the hotel itself is a highlight of your trip. There are a very few special hotels in Israel. Isrotel’s Beresheet in Mitzpe Ramon comes to mind. So do the King David and the American Colony in Jerusalem, two hotels steeped in the history of the holy city. But if the budget doesn’t include such extravagances their are good alternatives and we can get you the best rates at a variety of 3-5 star hotels. By all means go to the internet and compare prices. We’ll be happy to help.

During the low tourist season average temperatures in the center of the country range from the 50’s to the 70’s. The low tourist season corresponds with the only time Israel receives rain and a day or two of snow at some higher elevations like Jerusalem, the Galilee and Golan Heights. Even then, the news is good: during the five month November-March period Israel receives only 32 days of rain. The worst of it occurs in January and February each of which receive, on average, eight days of rain. Between April and October average temperatures range from 70 degrees to 86 degrees with sunshine everyday. 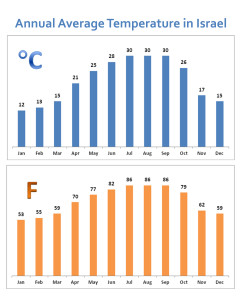 Israel has high and low tourist seasons which impacts on your experiences here in several important ways: weather, pricing and crowds. Low season extends from November until mid-March with the notable exception of the Christmas season. If you visit in the low season you’ll do well with pricing and smaller crowds. Weather-wise the low season may be the best news of all.

Planning in advance of your trip will pay dividends when you get here and make your trip run smoothly. Use the list below as a check-list for your preparations.