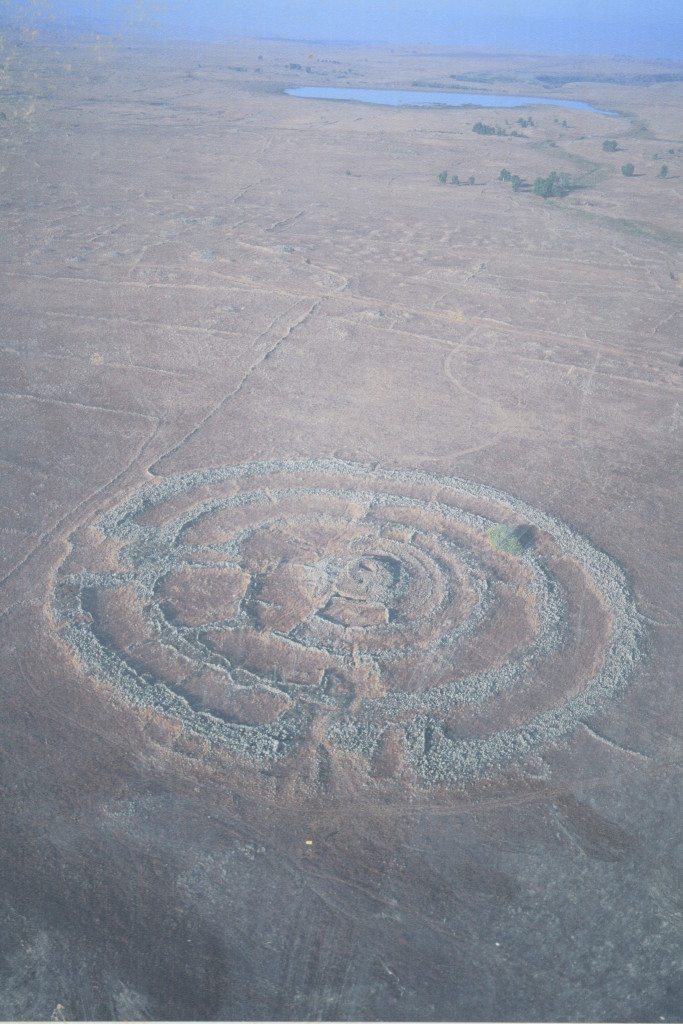 Almost a tenth of a mile across, Rujm el-Hiri requires taking a pleasant hike to experience it’s mystery first-hand.

From the air Rujm el-Hiri is impressive, a series of stone circles reminiscent of Stonehenge. Archeologists date it back 6,000 years and say it was used some sort of monument for 4,000 years. Later it was used as a burial site. And on the summer solstice the sun’s angle strikes the inside of the central mound illuminating a seat within. It’s off the beaten path. One can only approach by foot, from the west by leaving a car on the Waterfall Road (Highway 808) and hiking on the Golan Trail to the east for 40 minutes. Or one can take a shorter walk from the east along the Golan Trail for 20 minutes, but this involves leaving a car on one of the backroad dirt roads on the Golan. 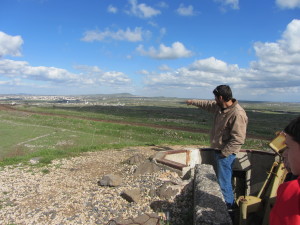 Jeeps can take you off the beaten track to see Golan wildlife and the border country with Syria in a way that even most locals don’t get to experience. Or, explore the hills and lowlands around the Jordan River where wildlife abounds and Israeli farmers produce award winning produce. 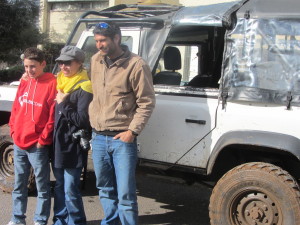 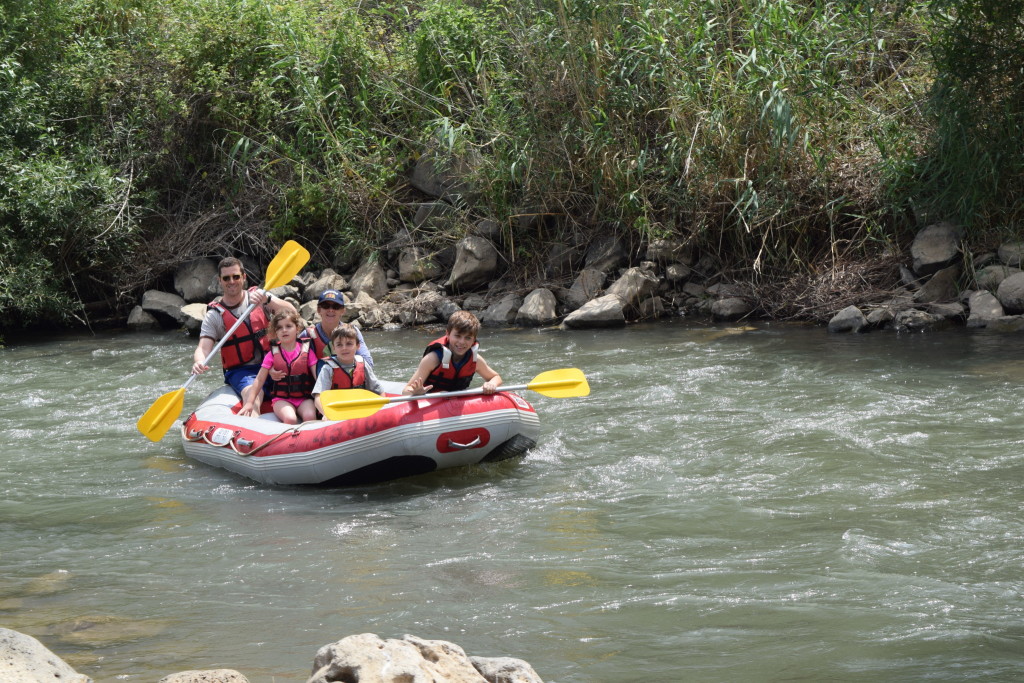 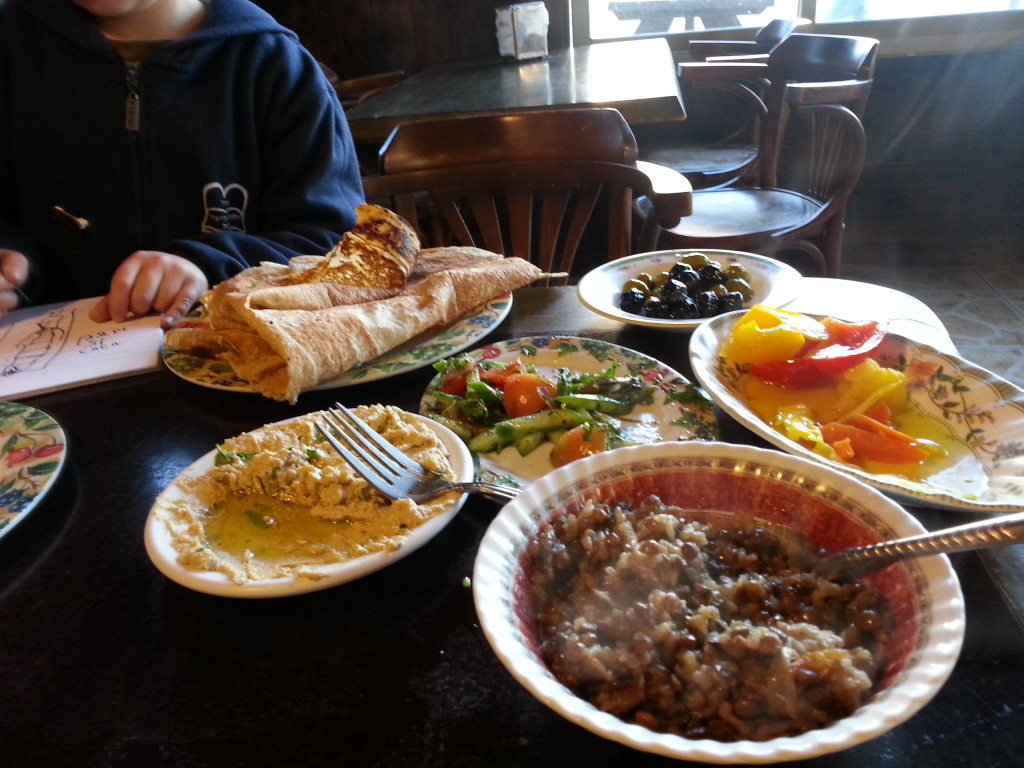 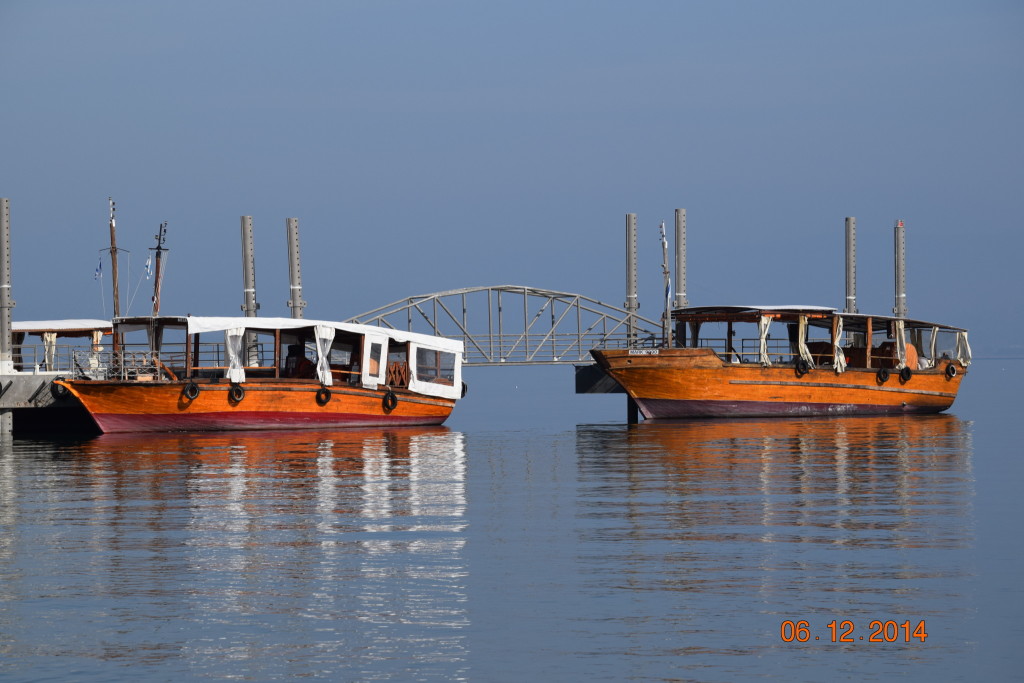 In 1986 when the waters of the Sea of Galilee were at a historic low point, the remains of a first century boat, 8 meters (27 feet) long and 2.3 meters (7.5 feet) wide were spotted by two fishermen brothers, sticking out of the water. What followed was an engineering challenge to raise the boat while preserving it and transporting it to land. Ultimately the boat had to be submerged in a chemical bath for seven years before being put on display at the Yigal Alon Museum at Kibbutz Ginosar. Boats of this type are mentioned 50 times in the Gospels, attesting to the role the lake and its local industries played as a backdrop to the ministry of Jesus.

The Land of Israel hides many secrets in its soil, from Biblical times. sometimes those secrets are just centimeters below the surface and only require a good archeologist to discover them. That’s what recently occurred close to the shores of the Sea of Galilee when, just under the surface, benches from a first century synagogue were discovered here in ancient Magdala, across the road from the small modern farming community of Migdal. In the synagogue excavators discovered a unique stone relief based on the actual seven-branched Candelabra which existed at this time in the Temple in Jerusalem.

In an article related to the find, a journalist asked one of the primary archeologists: ‘Is it possible that Mary Magdalene attended this synagogue?’ I asked Dina [Avshalom-Gorni, archeologist at the dig] before leaving. She smiled. ‘That’s something I cannot prove, but it is indeed a possibility. In fact,’ she added, ‘you cannot dismiss the possibility that Jesus himself attended this synagogue at least once. After all, he did travel and preach in this area.’
Source: Jerusalem Post, 04/12/2010, by Danny Herman.

So Migdal, a new discovery, is destined to become a must-see site in the Galilee, close to many other significant Christian sites.

“And he said unto them, Cast the net on the right side of the boat, and ye shall find. They cast therefore, and now they were not able to draw it for the multitude of fishes.” John 21:6.

Set next to the lake, The Church of the Primacy of St. Peter is a favorite pilgrim destination because here one has access directly to the water of the lake. Depending on the year in which you visit, the water may lap right up against the stones at the base of the church, or you may have to walk out dozens of meters to touch the water.As you walk out to the water, look over to your left and notice the gushing water entering the lake from one of the seven springs that exit the ground and feed the lake in this place. The term Tabgha, an Arabic corruption of the Greek word for seven recalls for us the naming of this place due to the abundant supply of water here.

The church itself may contain the rock on which Jesus roasted the fish described in the Gospel of John (see above). The primary objective here however is understanding the role which Peter is to play after the departure of Jesus. As Jesus instructs Peter: “Tend my sheep.” (John 21:16). This instruction, in addition to Jesus previous utterance: “And I tell you that you are Peter, and on this rock I will build my church” (Matthew 16:18) form the basis for Catholic belief that Peter was to become the first Pope.

The modern, intimate church seen here was built in 1933. It incorporates foundations and parts of a church built in the 4th century during the Byzantine period.

Located overlookng the historic Jezreel Valley, this is the traditional site of Jesus’ narrow escape from his town-folk, memorialized in Luke, chapter 4. It’s also the place where one may start or finish the Gospel Trail, highly recommended for Christians who want to feel the land during their spiritual journey. 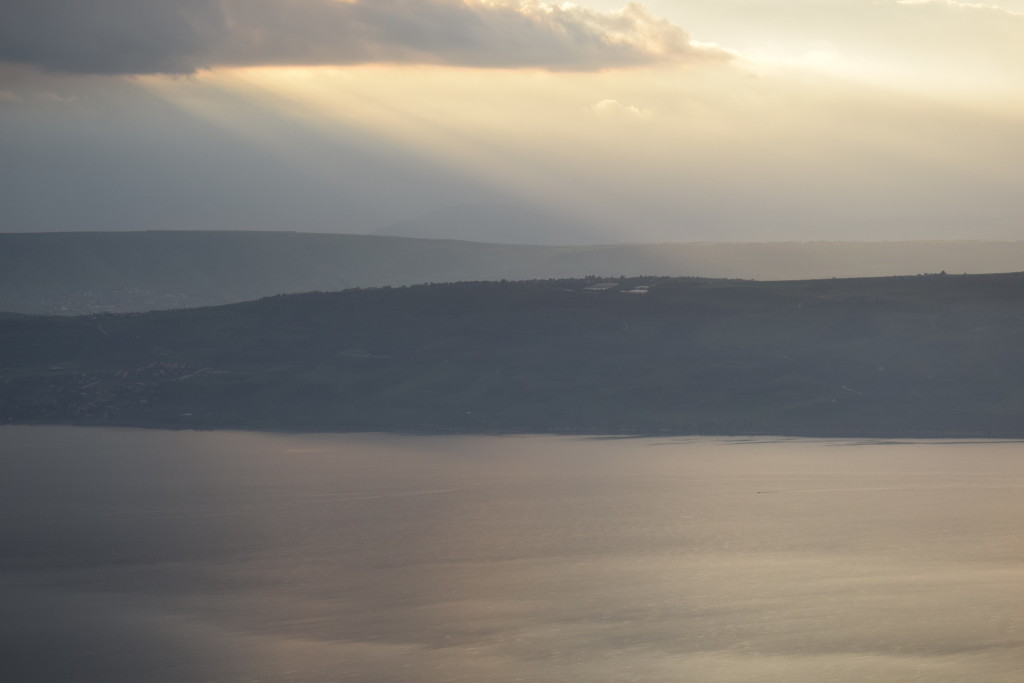 A view of the Sea of Galilee looking west, from the Golan Heights.

Just a five minute walk from the Yigal Alon Museum at Ginosar as well as on the waterfront at Tiberias, Ein Gev and Capernum National Park, we have the chance to experience the Sea of Galilee on a Sea of Galilee Boad Ride. This will typically take 45 minutes to an hour and carry us up the shore along the so-called Christian corner of the lake where we can easily spot sites such as Tabgha, Mt. of Beatitudes and Capernum. The relaxing ride allows for contemplation of the miracles which Jesus performed here including Walking on water (John 6:19-21), and a miraculous catch of fish (Luke 5:1-5, John 21:1-6). But if you take the ride in the Winter occasionally the winds blow hard and the lake rises up in fury and it’s not hard conjure up the vision of Jesus calming a storm (Mark 8:23-26). 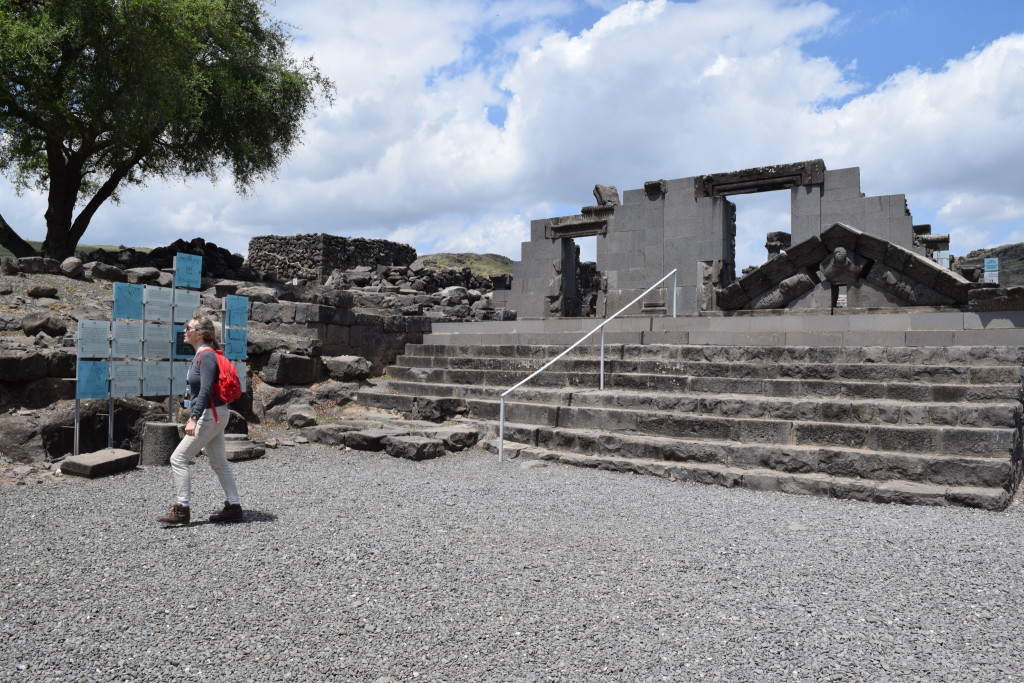 The synagogue at Corazim, mentioned in the New Testament, crafted from the local basalt stone. Basalt rock is a particularly difficult stone to carve. 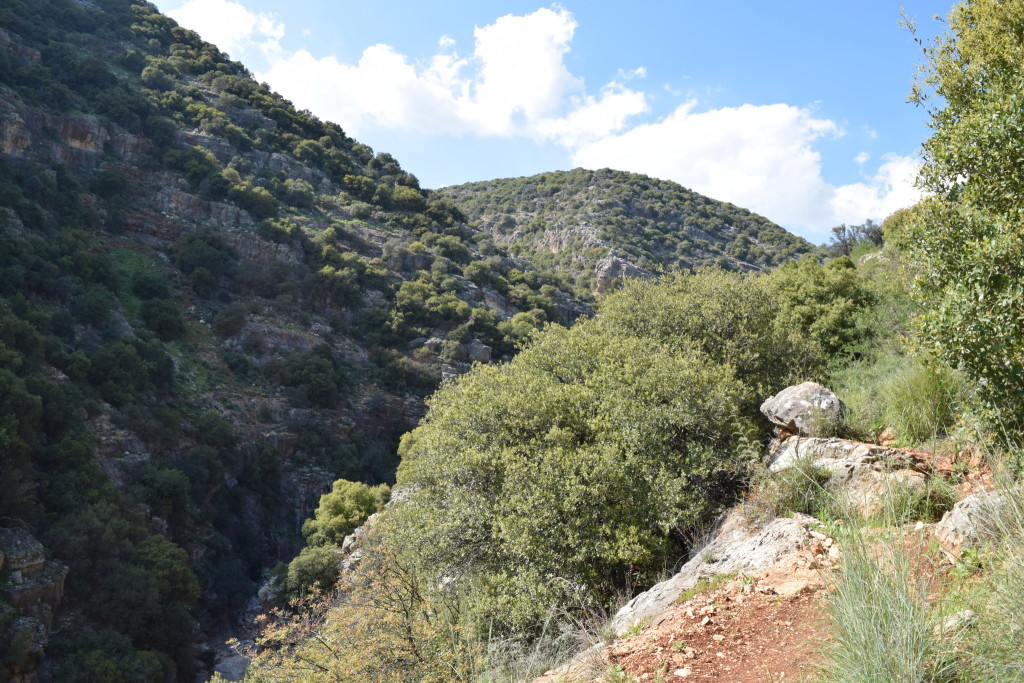